Andy Warhol is an artist both immersed and separated from his work. He creates a distance between viewer and artist with the purposeful use of materials or methods:  printing, film, graphics, silkscreens, video.  The advertising medium is also part of Warhol’s exploration as he brings what is essentially commonplace,  or mundane to a project,  then elevates it with an artistic technique.   The choice of methods, also adds a sense of irony.  When he was asked to paint the BMW race car in 1977 (now on display at the Paris Photo show at Paramount Studios) he rose to the occasion.  The ‘art performance’ was captured on video and joins a number of other artists who have created cars in the BMW Art Car collections. Watching this video, I was struck by several significant things about it.  I am not an expert on Warhol, and don’t pretend to be here; but the film created for me a new set of ideas about him that you may have missed.

First of all, Warhol was trained at Carnegie Mellon as both painter and graphics artist which makes him a traditionally trained or classical artist. There is no mistake that the man can paint with a sense of drama and action having used the film medium as a technique of separation between artist, or creator; audience and voyeur. The  ‘act’ of painting is part of the story as we see him ‘paint’  the car.  Also, a note on the ironic costume worn by Warhol: A typical jacket worn by an automobile factory worker is calculated to make him look simple and unassuming.  His usual wig, and large glasses are all part of the performance that is “the art of painting”. The video in itself, is a piece of performance art about a ‘performance’ car that has gone from mechanical machine to a piece of pop art. The recording on film of the artist’s rendering of the car, as well as the sports footage later seen of the car winning races contributes to the aspects of the story that is about “speed” and “art” moving through space.

Now, some thirty years later, sitting inside a gallery space the car has another purpose as art piece that has the irony of being a piece of sculpture  or an abstract painting as well as an expression of commerce on a number of levels. The blurring of line(s) between art and commerce is a continuous thread throughout the history of art and is always controversial. This is highlighted by the unique pairing of BMW and Warhol, perhaps more than any of the other artists chosen for this project. 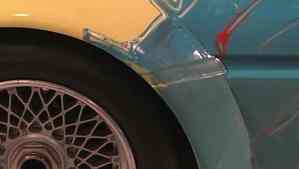 For more information about the ART CARS by BMW, see the videos at:Documentary footage of the artists and their Art Cars in motion can be seen at:http://www.bmwusa.com/Standard/Content/Uniquely/CultureofIdeas.aspx.

The Paris Photography Show, put on in both Paris and Hollywood each year.