The notion that ‘art can save the world’  creeped into the cultural vocabulary in the counterculture era of the 1960’s. By the mid-1970’s it was an established idea.  Los Angeles in the 1980’s was the landscape of the outsider (culture, market, media, identity). The Arm and Hammer museum was one of the first to exhibit Robbie Conal, a political poster artist who had a street crew post art all over the city. His images of the Reagan years were both humorous and subversive; he had no gallery that would represent him except the wall of a bus stop or a lamp post or a power box. His crew of street kids would drive all night to post the latest imprint.  As you drove through the streets of LA the rogues gallery of political news were part of your journey. Instead the gallery was the streets and his audience the populace. He was a pioneer that took the political cartoon off the page and into our everyday lives. Only a few museums considered this type of art “valid”.  MOCA (Los Angeles) was one of the first museums to exhibit the political poster as did UCLA Armand Hammer Museum who did a retrospective in the mid 1990s.  It was extraordinary to see the politics of a decade in one room.  Mr. Canal’s unique talent was both the imagery and the one word messaging.  Mr. Conal, in his use of the political poster to express his outrage or commentary.  Today, Instagram would be his medium.  With the recent political climate around the world the notion of “street art” has become a more three dimensional experience with social media platforms expressing political ideas through mostly, the video. Oddly, the same idea applies:  the solo experience of viewing is shared by a collective mass audience.

Now, more than ever we need art to protest, to enlighten, to outreach or resist the status quo. We live in unique and dangerous times when things we thought would never change might slip away.  I for one, will not wait for someone else to speak for me; to all the artists and creatives out there, neither should you.

The time to act, is now.  Art collectively can change the world if artists will continue to find the medium that allows them to resist, speak out and protest. 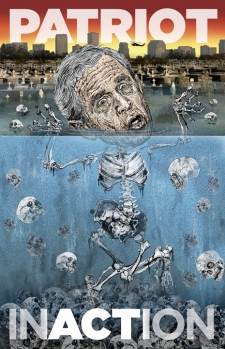 Editor’s Note:  This post was re-edited from its original format with some changes to the original posted 5 years ago. (It should be noted this was during Mr. Conal’s long hiatus from the national political art/protest scene). Rolling Stone recently commented on the recent updating of Mr. Canal’s work for the current political climate.

You can read about it here: https://www.rollingstone.com/culture/culture-features/robbie-conal-street-artist-cabinet-of-horrors-trump-735466/

Begin typing your search above and press return to search. Press Esc to cancel.